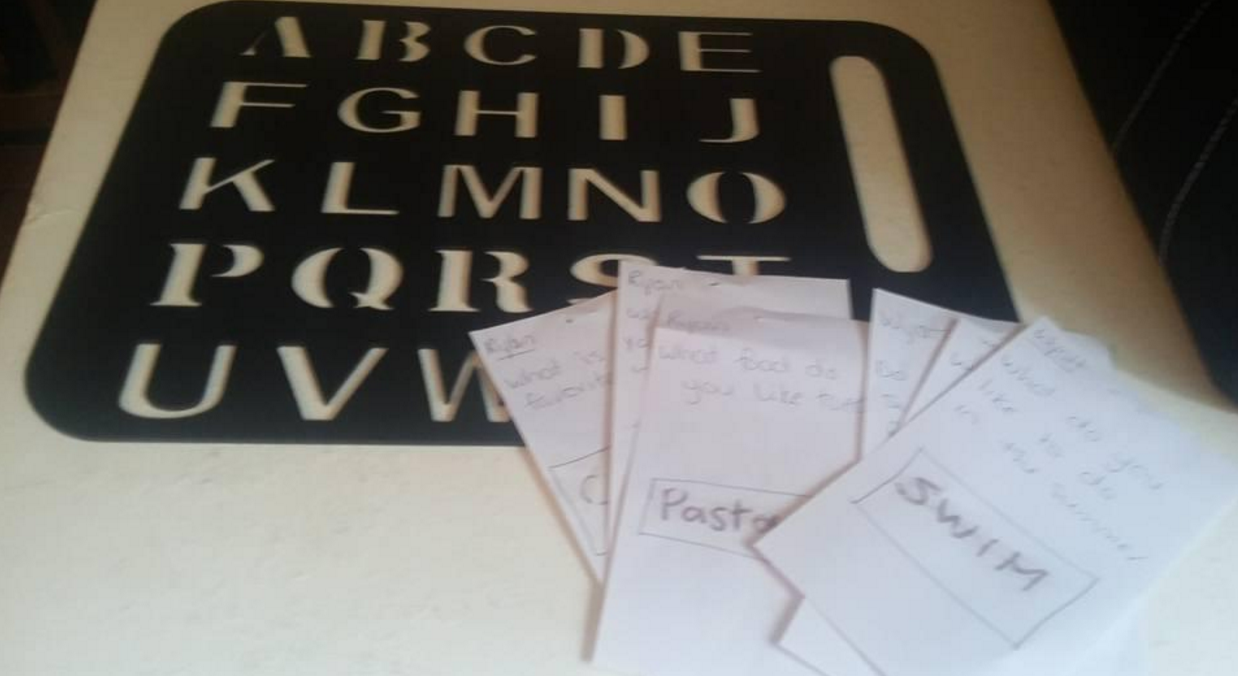 We are often inspired by the creative strategies our families find to make education and communication on the letter boards interesting and meaningful. During a Skype consult, Jasmin explained how she created social and communication opportunities between her son, who spells to communicate, and her nephew. Jasmin graciously agreed to share her fantastic strategies as today’s guest blogger!

Guest blogger bio: Jasmin Dutton is one of our GKTC moms from Quebec, Canada. She has been an avid homeschooler to both her sons for the past 7 years. After months of attempting to teach her son to point on her own, Jasmin and Wyatt took off on the boards after observing a GKTC workshop in March 2016. Jasmin enjoys gardening, and the outdoors in all seasons. She likes to emphasize a love of nature, curiosity and social contribution in her teachings.

What has always attracted me most to Growing Kids Therapy Center is the emphasis Elizabeth and her team places on community building and collaboration amongst their students. This is something I’ve always wanted for my son but due to so many challenges, have struggled to create.

This past summer I have been determined to make it happen. So I took everything I have learned from coaching my son on the boards and put it into helping him connect socially.

Tolerance – for socializing: not outside the house, zero with strangers, tricky with same aged peers, and requiring structure and support. So it would have to be at home, someone older and familiar and well planned. There was also no way Wyatt would tolerate being left alone with anyone. This was not going to be respite. I would have to be present and directing the engagement.  Luckily, my 17 year old nephew lives nearby so I got in touch with him and made arrangements for him to come by for an hour a week to “hang out” with Wyatt and me.

Skill Goal – the challenge here was socializing so it would be over the top to work simultaneously on learning new physical skills. We’ve stuck to familiar activities that Wyatt excels at, such as cooking and swimming and have participated in them as a team, with me coaching both guys in the activity and creating opportunity for them to work together.  I was able to model for my nephew how to interact with Wyatt

Cognitive Goal – having always homeschooled my son, conversation can get pretty stale around here. I wanted my nephew to bring in conversation that would expose Wyatt to what teens are up to; the music, hobbies, and interests. Conversations were started around where my nephew was going to college in the fall, what his course load looked like and what he had to accomplish to be accepted into his program.

Response Level – well, response level wasn’t something I had thought too much of in the beginning, hoping really, that Wyatt would just stick around, but it was something that developed organically over time.  During one occasion, I came up with an activity Wyatt and his cousin could do together.  I would ask his cousin questions regarding his interests, he would then write his answer in invisible ink and Wyatt would use a developer pen to reveal the answer (we have linked two cool options if you want to try this at home!). Wyatt was pretty enthusiastic about the activity and I asked if he wanted me to ask him questions as well, and he agreed. So I quickly ran to get his board and took turns asking the guys each a personal interest question, trying my darndest not to cry at what I was witnessing.

This has been such a huge success for Wyatt that I have recently hired another teen (still familiar but less so) to come by during the week, and am using the same goals with her as I do with my nephew. I still need to remain present and help guide the interactions but my son now has the opportunity to collaborate. This fall, I will definitely be planning out more ways to use the boards during their times together. The experience has given me a burst of confidence and motivation to look closely at the opportunities I want for my son, envision what that could look like for him and make it happen.

Jasmin, thank you for sharing your fantastic ideas for developing new relationships for your son! For many of our kids, building in opportunities for peer communication requires creativity, I know so many families will benefit from these great strategies!