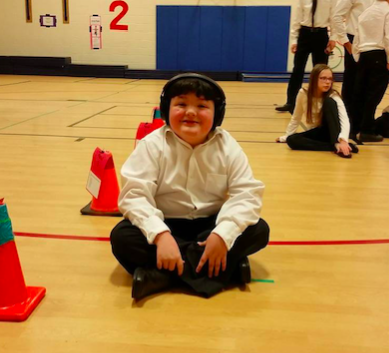 I wanted to finish off 2016 with one of our favorite moments of the year. Prepare for some guaranteed happiness as you witness what happened when one of our clients was given the opportunity to conduct his school choir. Evan is one feisty, adorable guy who never fails to make me laugh during our sessions together. His communication through spelling is strong – but Evan has a way of getting his point across with or without the letterboards! Evan’s video of his conducting debut went viral but when his mother told me the entire story,  I knew you all needed to hear it too!  Evan’s mom, Elizabeth Zielinski, agreed to share Evan’s story with us as today’s guest blogger.  Enjoy and kick off the New Year by sharing this story of joy!!  ~Elizabeth, Elizabeth & Evan

My son, Evan, is 11 years old, autistic, and unreliably verbal. He is in fifth grade in public school, placed in a self-contained classroom, with various opportunities throughout the day where he is included with his neurotypical peers in the general education setting.

Some of Evan’s behaviors prevent him from being fully mainstreamed into general education classes for safety reasons. But with our insistence and with our school’s cooperation, he is included in many experiential learning opportunities and also in extracurricular events. One of those events was the recent fifth grade winter chorus.

His dad and I were told he would be included last Fall, and we hesitated to give permission because we didn’t know how well he would do with the sensory stimulation. But we had a lot of faith in our school’s remarkable music teacher, Mr. Charlie Ring, and trusted that he would ensure Evan’s experience was a good one.

Leading up to the event Evan grew excited and told us that he was going to be a guest conductor of one song. He showed us his plan for approaching the front and leading the chorus.  We were naturally entertained and thrilled to expect this.

When the afternoon school assembly performance arrived, I waited expectantly to see Evan’s debut as conductor. To my disappointment, it didn’t happen. I approached Mr. Ring to ask why, only to learn that it was never part of the program, but a way that Mr. Ring was helping Evan to participate in rehearsals. Evan didn’t seem to realize that it wasn’t going to happen for the actual performance, or if he did, his unreliable speech meant we didn’t know what he expected or hoped to have happen.

And that’s when the magic started. After I asked my question of Mr. Ring and we realized the misunderstanding, Mr. Ring only asked if I thought Evan would be able to do it without a formal rehearsal. I said I thought he would. Right then and there, Mr. Ring starting planning the changes to include Evan as guest conductor in the evening performance for the community.

Prior to the second and last performance, Mr. Ring explained to the rest of the fifth graders what the change to the evening program would include:

Missing from that video was the round of applause Evan got from his classmates before the announcement that he would be conducting, proving that acceptance comes naturally to kids when given the opportunity.

Evan waited patiently backstage, but you can see the anticipation on his face.

And then, show time. It was the second performance of the day, he had been wearing his uncomfortable show clothes for hours, and he had to stand on risers and pay attention; even though singing along was not an option for him. Anyone who knows him would tell you, all of that alone was a lot to ask. But toward the end of the show, this happened:

No one had seen him do this before, but he showed us that it was worth the wait. As of this writing, the video has been viewed over 50,000 times on Facebook and another 1,300 times on YouTube; and has been shared hundreds of times worldwide. Based on the comments I’ve received; it has touched a lot of people.

What I love about this is not just that my son had a moment of joy and celebration. It’s also that everyone else shared in that with him. It wasn’t just the joy on his face in the video that touches me, it was the appreciation of his fellow fifth graders and the audience when they watched him have his starring moment. There are some chuckles, but not at Evan’s expense.  They are just seeing him have an entertaining experience.

The most important thing we have learned about inclusion through this experience is that it doesn’t mean building events around Evan’s needs, oversimplifying his experience, or putting him into a fully neurotypical environment and seeing how long he can last before extracting him. What it does mean is being open to and creative about those moments that allow him to learn and grow like any student wants to do. That requires seeing him with the best of expectations about what he can do, and trusting that no matter what happens, everyone will grow from it.

Finally, the awesome Mr. Ring sent Evan a celebratory gift after the fact: he now owns the conductor’s baton he used that evening as a reminder of his starring moment. 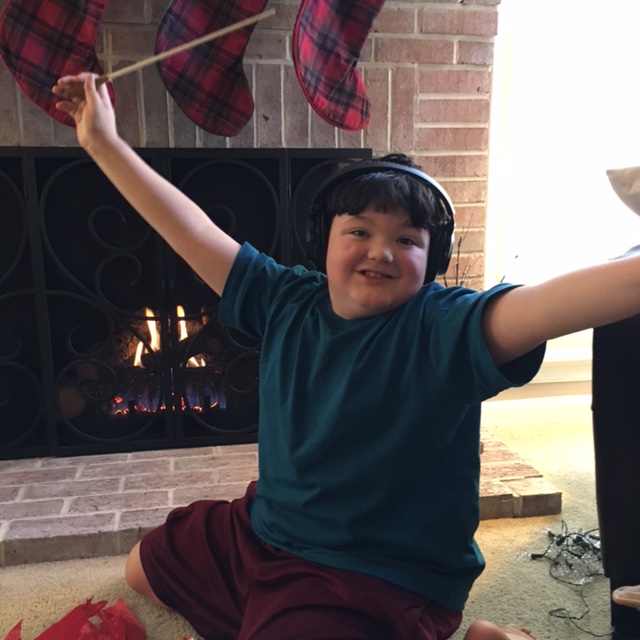