I am so excited to introduce Diane Belnavis and Brent Sullivan as guest bloggers!  We formed an instant friendship when I met Brent, Diane and Dylan at the TASH Conference in Portland Oregon in November 2015. They have one of the most beautiful stories I have ever heard and it keeps getting better and better with time.  I am so grateful to Brent and Diane for their willingness to share their story.  Be sure to meet Brent at the Nonspeaking CommUnity Consortium’s Motormorphosis Conference July 21-23, 2017!

Diane’s story:
In the spring of 1984, six years before my son Dylan was born, Brent joined our family. He is a non-speaker with autism and is now 48 years old.

While in graduate school in Oregon in the early 80’s, I worked as the night manager of a group home for children with disabilities (yes, children. really). Brent moved into the home with four other children in 1982. He was thirteen years old. When I finished my degree a few years later and left my job at the group home, Brent came with me. By that time, we were close friends and I knew that there was no way I could leave him behind.

My son Dylan was born six years later. They grew up as brothers and have always been close, even though there is a 20 year age difference. When Dylan was in elementary school, he wrote an amazing story titled ‘My very own Rain Man’. It is the story of his childhood with Brent. They have created their own holiday family traditions together, and Brent has been there with Dylan through every one of life’s milestones.

Dylan was living in Portland, Oregon when Brent began using the letterboard three years ago. Of course I kept him up to date on the progress Brent was making, but until he saw Brent do it for himself, the reality of Spelling to Communicate didn’t really sink in. He met Elizabeth and the GKTC tribe in 2015 when they presented in Portland at the TASH conference, and months later decided to move back to Pennsylvania to learn letterboard with Brent. 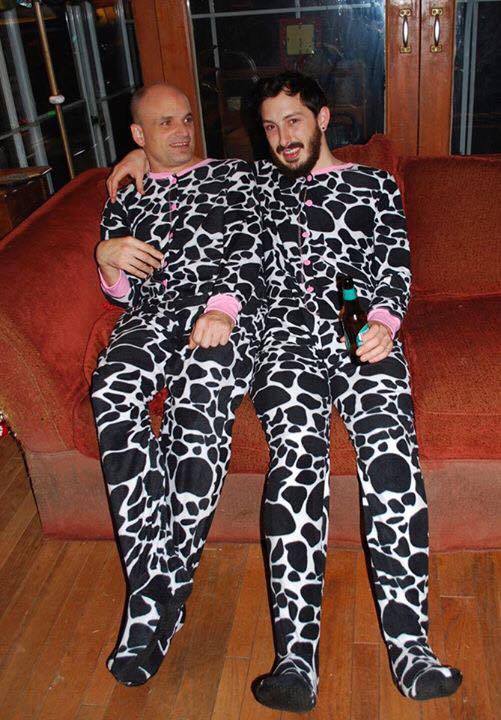 Dylan became Brent’s official staff person last year and they now work on letterboard a few times a week (in between farm chores and planting sunflowers!). Last fall, Brent spelled to Dylan ‘Stop I am in need of medical attention’. Since then, for the last six months, Brent has been guiding us with spelling… through medical appointments, surgery, ultrasounds, cat scans, blood work and XRays. We have practiced scenarios, watched YouTube videos to prepare, and Brent has instructed us, by letterboard, what to say to the doctor in order to lessen his anxiety and keep his body calm through exams. I go into each test and appointment first, and explain to the doctor or technician the requests Brent has made and the trigger words to avoid.

He has been unbelievable. He has been completely successful in completing everything asked of him. He has guided Dylan and me through each day as far as how he wishes to change his diet and his daily routine to improve his overall health. He has spelled ‘Do not offer me any sugar’, ‘Take me to the Y for exercise’, and even ‘No, I don’t want ice cream, I want a fruit smoothie for dessert’!

In March, he spelled to Elizabeth ‘Letterboard has saved my life’.

Brent’s story:
MY DESIRE IS TO ADVOCATE FOR COMMUNICATION SUPPORTS AND HOUSING FOR ADULT AUTISTICS. LIFE IS WORTH LIVING NOW THAT I HAVE COMMUNICATION. ELIZABETH, COMMUNICATION JUST SAVED MY LIFE. I FEEL GRATEFUL BECAUSE I TOLD MY DOCTORS WHAT WAS HAPPENING. I AM WORRIED BUT BELIEVE IN THE DOCTORS AND MEDICAL INTERVENTION.

ELIZABETH, I AM THE MOST LUCKY MAN EVER. BUT THE ONES IN SILENCE ARE NOT SO LUCKY. THEY MIGHT NOT EVER BE ABLE TO TELL SOMEONE THEY ARE SICK. THEY MAY NEVER SAY I LOVE YOU. THEY NEED TO LEARN HOW TO SPELL ON THE STENCIL BOARDS AND LETTERBOARD TOO. TEACH THEM LIKE YOU TAUGHT ME.

ELIZABETH, I WAS THINKING ABOUT MY LIFE. I NEED TO MAKE SOMETHING OF MY TIME ON EARTH. THE WORST THING IS TO BE A VISITOR TO LIFE INSTEAD OF A PARTICIPANT. I WANT TO ADVOCATE FOR OTHER INDIVIDUALS WHO ARE TRAPPED IN THEIR OWN BODIES. THEY MUST FEEL THE SAME LONELINESS I DID. TIME TO JOIN THE CONVERSATION INSTEAD OF BEING THE CONVERSATION.

THE SAD REALITY IS THAT MANY HAVE GIVEN UP ON ADULTS. OUR LIVES MATTER. ELIZABETH, THIS IS MY MISSION NOW. THE ADULTS HAVE GONE SILENT TOO LONG. MY QUALITY OF LIFE HAS CHANGED DRAMATICALLY SINCE I STARTED SPELLING WITH DIANE AND ELIZABETH AND DYLAN.

ELIZABETH, NOT WITHOUT SPELLING WOULD I HAVE BEEN ABLE TO GET THE MEDICAL HELP I NEEDED. JUST HOW MANY HAVE DIED OR SUFFERED JUST BECAUSE THEIR OWN BROKEN BODIES CONDEMN THEM TO SILENCE?

ELIZABETH, THERE IS MUCH WE NEED TO DO. LET’S REACH OUT TO SILENT ADULTS AND TEACH THEM TO SPELL ON THE LETTERBOARDS. TEACH PARENTS, CAREGIVERS AND THOSE WHO WORK WITH MENTAL EDUCATION THAT ONE IS NEVER TOO OLD TO LEARN.

Thank you to Brent and Diane for sharing their beautiful story, dreams and hopes with us. I am truly grateful to have you all in my life!  ~Elizabeth