GKTC’s Tribe has kicked off the fall schedule with an exchange between The University of Virginia students and Tribe members. The University of Virginia students are taking the undergrad psychology course, The Science and Lived Experience of Autism along with the young adults of Growing Kids Therapy Center’s “Tribe”.  Last year, the Tribe completed the coursework for this class along with the UVA students.  This year, the Tribe will be collaborators working with the UVA students to deepen their understanding of autism, inclusion, and neurodiversity.  The Tribe and UVA students interact and collaborate through shared blogs, discussion and project groups and several in-person exchanges. The objective of our first exchange on Saturday, September 16, was to begin discussing ideas of what makes a welcoming community and the kinds of ways that we can contribute to making our community and other communities more welcoming.

UVa students rotated in different rooms across two rotations; participated in the large group discussion; and then in the small group project discussions. Take a look at some of our discussions:

Group A kicked off their time together by discussing the intricacies of introductions. Take a look at what they said! 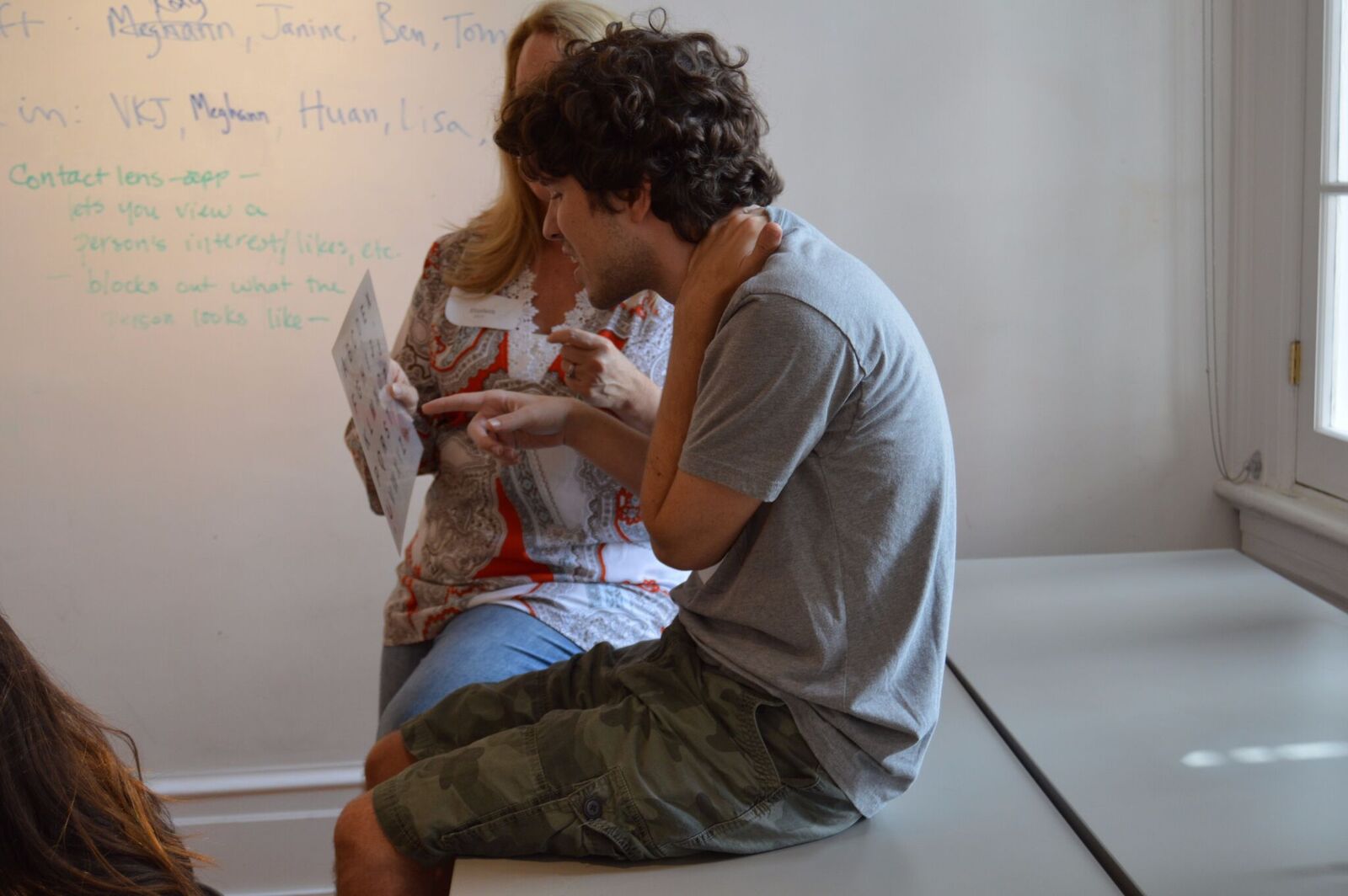 Introduction and a secret:

Claire: I have played piano for 10 years

Katie: One of my jobs was to be the Yogi bear mascot

Dustin: My name is Dustin I have unique sense of humor

Haley: I work training giant African rats to sniff out bombs for the DOD

Annie: When I was 10, I worked in a singing ice cream shop. The employees would sing

Ryan: I’m Ryan. I have an obsession with music.

Morgan: I have torn my ACL twice. The second time I tore it, I fell down the stairs.

T: You guys are cool. I’m Tristan. Definitely, my secret is that I’m a science nerd.

Bobby: Unlike most people when they get stressed who nap or relax, I build things. I built a robot and a 3D printer.

Elizabeth: I am director of Growing Kids Therapy Center. I have a deathly fear of Frogs

Let’s build a better introduction: What questions could we ask each other?

Sam: What is your experience of home?

Morgan: Recruitment chair for sorority — open-ended questions about family, friends, what you want to do in the future and what do you do for fun. Not quantitative, but “How do you interact with your siblings?” Instead of “How many siblings do you have”

Elizabeth: As a speech pathologist, we want a language sample so we ask open-ended questions.

Dustin: I would like to know what someone is passionate about.

Katie: I think that is a great way to get to know someone and their personality

Annie: I was gonna say “what are you passionate about too” Asking to find similarities to find common ground

Elizabeth: How do you ask that in a question?

Annie: Bring up something you are passionate about, and then ask for someone else’s thoughts

Elizabeth: Even if someone says they hate music, that is an interesting conversation-starter

Ryan: I like to know what kind of music someone likes.

If you were going to invent something and money’s no object, what would you create to make the introduction easier

Bobby(UVa): Hitchhikers guide to the galaxy — device which allows you to hear what people want to say vs what they actually say.

Dustin: I echo what Bobby said

Annie(UVa): Invent something that would take the awkwardness out of the situation. Like an “awkward dehumidifier”

Ryan: Such a great idea.

T: Something that reveals truth not everyone’s eyewash

Group B kicked off their time together by discussing a video and what it takes to create a welcoming community.  Take a look at what they said! 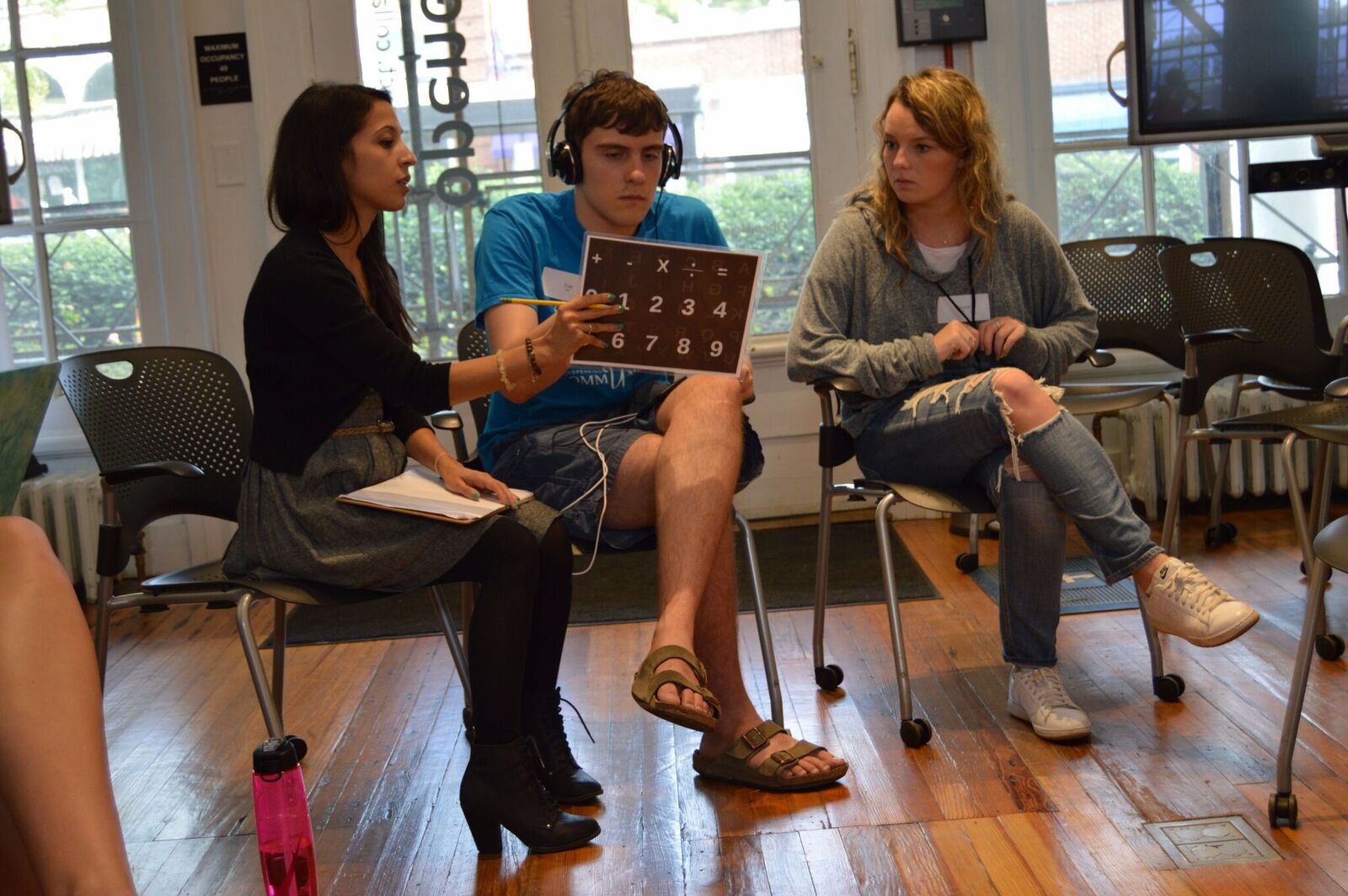 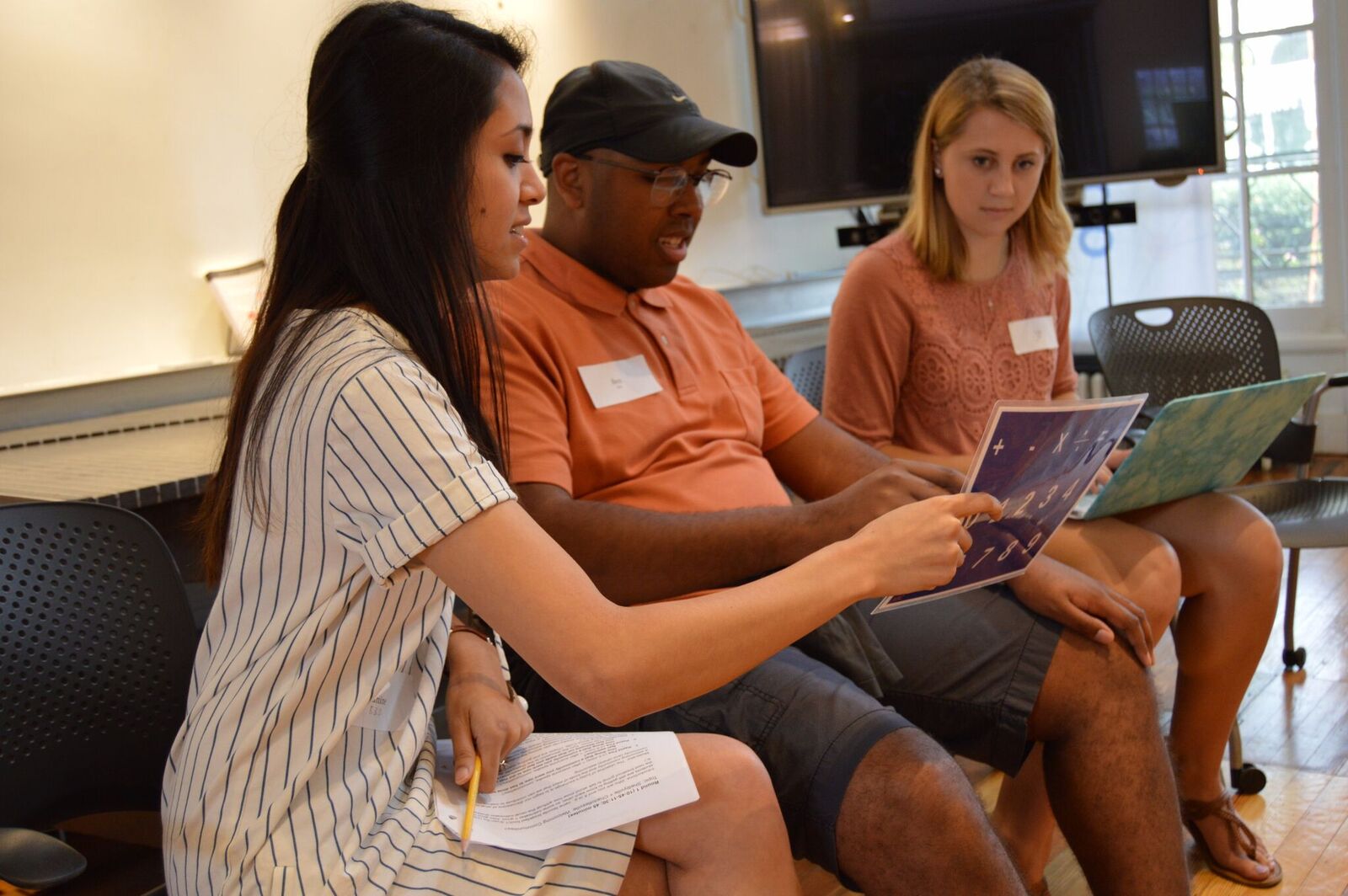 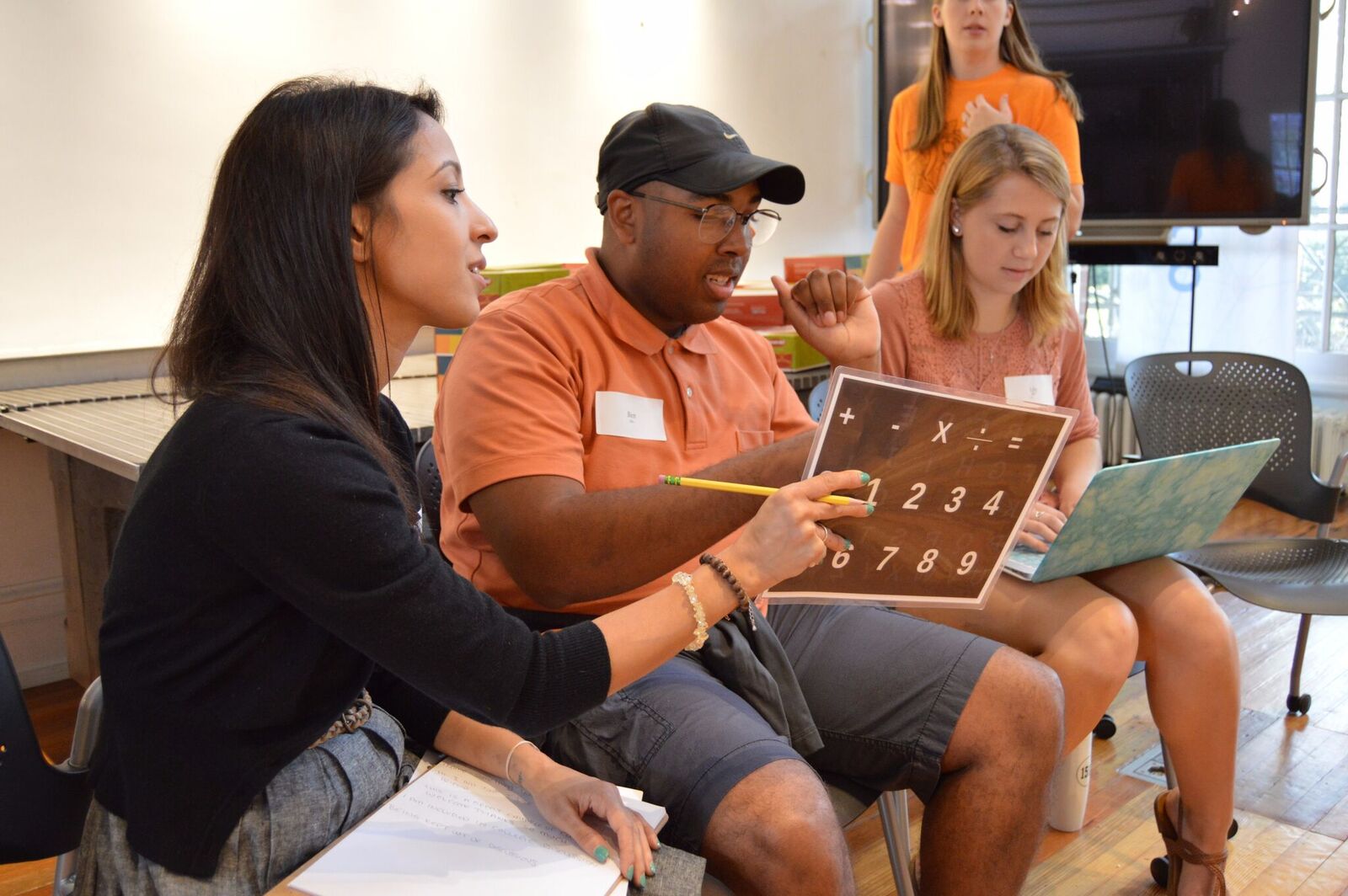 If we don’t have means to communicate and join the discussion, a lot of conversation happens about and around you. Why was Shelbyville assigned for today’s discussion about creating welcoming communities? What did you get from the film?

Natalie – refusing to accept culture, reluctant to change because not something they were used to

Ben – keeping a closed mind about others. To me this is too familiar, most see us in a segregated manner.

The language of “us” and “them”. Us – the Shelbyville community, even those that a diverse community. Them – the immigrants. Tom brought up that some members were trying to be accommodating – what are some examples?

Natalie – the one church, although their overall goal was to convert, wanted to host dinners

Motivation was questionable. Woman was trying to teach them to pass citizen test.

Tom – there are examples of community members who are from a different country, (who) remember the transition (to Shelbyville), there was a guy who worked in general motors.

Ben – life is funny in that there is always going to be two sides to every story. In the story the church included, but not in the fashion needed by those ostracized by the masses.

The church was trying to include but with questionable intentions. In hosting dinners, what were they doing that was supposed to be welcoming but may have been not so welcoming?

Natalie – when one of the women at the dinner where they cooked and tried to show their culture, asked if they were going to bomb the town based on rumors she had heard. Even though sampling their culture is a step in the right direction, being asked that about a refugee trying to escape a situation was pretty awful.

Ben – while things were supposed to be getting to know each other, the questions were one-sided. The Shelbyville people asked all the questions.

Tom – The religious leaders who met were all white men.

Natalie – thought it was interesting the only time I got a sense of someone acknowledging their privilege in Shelbyville was when four heads of different churches were talking – what can we do because this is threatening our way of life – but one said well it’s easy for us to say because it’s coming from us/we’re privileged. The other time when someone said I have people approaching me saying how am I supposed to get rid of this attitude that have been ingrained in me my whole life.

Roxy – what do you think a person could do, after you recognize that privilege, how do you shift that thought? What step would come next out of that realization?

Lily – finding things you have in common, how you’re more similar than different

Ben – Attention community: you can be part of the civil right movement by noticing and speaking to minority groups.

Tom – Dialogue is key, but also dive into the communities.

Group C had a similar discussion as Group B:

Vikram: so, the meat of our conversation in this breakout group is focused on the Shelbyville documentary and reading about Charlottesville. I have some guiding questions but i would love for this conversation to grow organically. Any thoughts about why this documentary was chosen?

Raquel: I thought the Shelbyville documentary had a lot of examples of the more effective ways of how to make a welcoming community. Some groups did reach out and others did not

Carolynn: I thought it was really interesting how when they brought the reporter in, he was saying he wrote the [negative] articles and had been trying to report the truth and wanted to talk to the Somalis – interesting excuse he provided

Izzy: they always referred to the people as their racial group, not just as the person. Salon worker said ‘When the hispanics come in to get their haircut’ – trying to sound not like she’s looking at their race, but by saying that, she is. This correlates to people with autism – referring to people within their group, and not as people.

Huan: I think ignorance is poison to society and no matter what, it’s not going to be solved without honest difficult discussion.

Vikram: what kind of things have to be discussed?

Huan: Oh Vikram. Where to start? Maybe we start with stereotypes.

Lisa: I think having a straight discussion can only educate those willing to listen

Vikram: so what do we do about people who aren’t willing to listen? How do we change?

Lisa: we share mindsets. We try to understand them too.

Xara: Going back to what Izzy said, people assume by not interfering (they are creating welcoming community), but they’re actually being apathetic.

Meghann: there’s a man who goes out who meets members of the KKK and white supremacists, to try to understand them.

Vikram: one of the things that I heard from a philosopher when communities get together to discuss the hard stuff, he says we should start by talking about soccer and movies before moving to the hard stuff.

Flo: there were protesters on both ends (in Cville), but by being there you’re not being productive – the Vice documentary interviewing the white supremacists would’ve been interesting to be a part of from the other side

Meghann: just showing up is like buying a brand name, you want people to know you’re there and you’re not doing anything

Vikram: what should happen – how do you grapple to try and solve this problem given the history of marginalized groups?

Xara: on tuesday, there were some student protesters [who shrouded] the TJ statue with a #BLM banner. An email was sent that gave a narrative and counter-protest statement from the students that said this was a wider thing than just a student CIO voice. Where is the line – if you remove the Jefferson statue does it end there? Where do you draw that line in terms of change and what is productive/progressive?

Huan: I think the statues would be better suited for museums for educational purposes because let’s face it, history cannot be changed

Xara: what do you think about university statutes? Would the rotunda count as a museum?

Huan: well it’s tough to say, but how important is the statue?

Lisa: I think it’s incredibly old fashioned to honor historical figures with statues. They’re not Gods. they’re taught in schools so their memory’s honored.
After the discussions, all the students enjoyed eating lunch together outside! 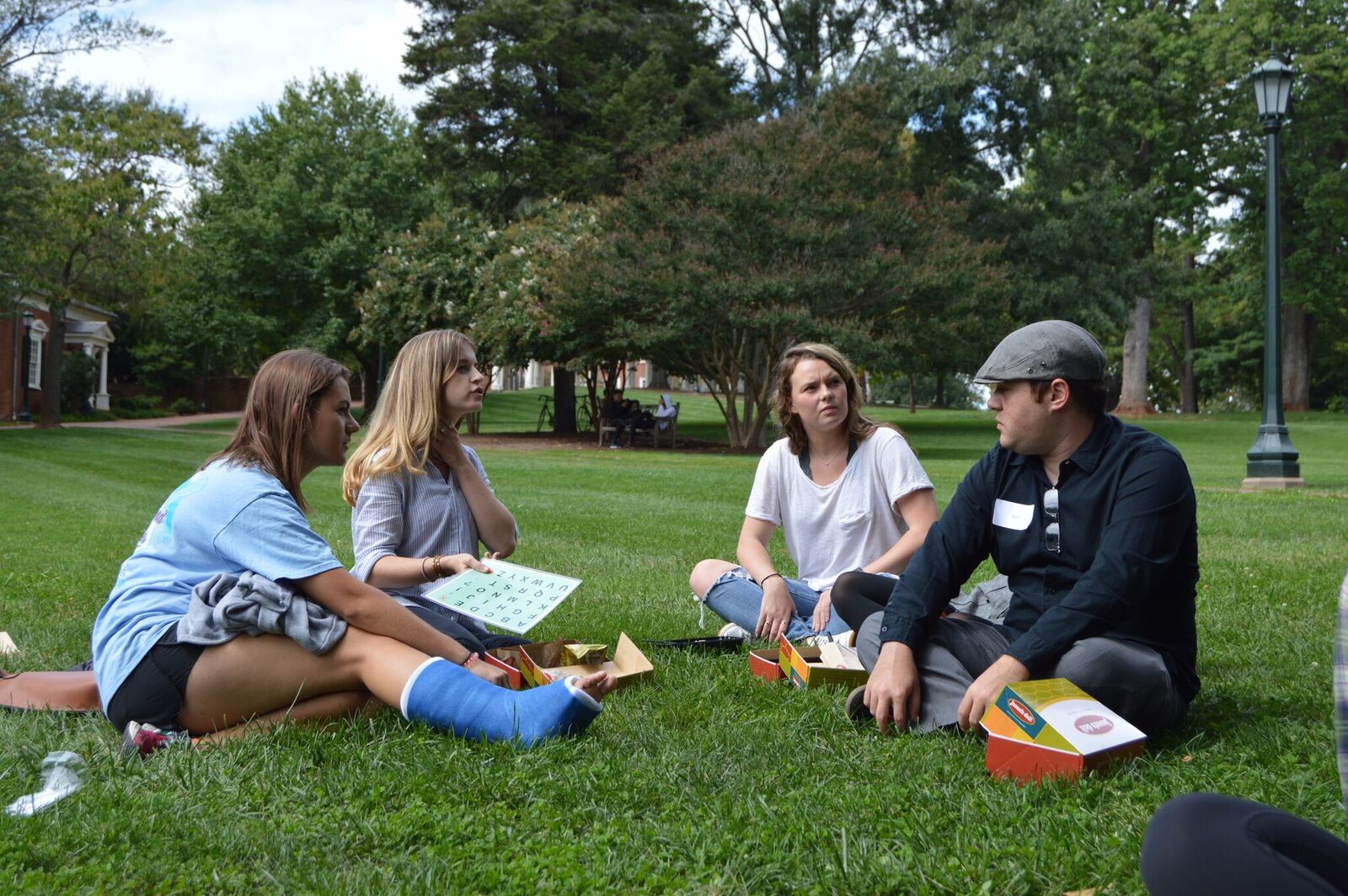 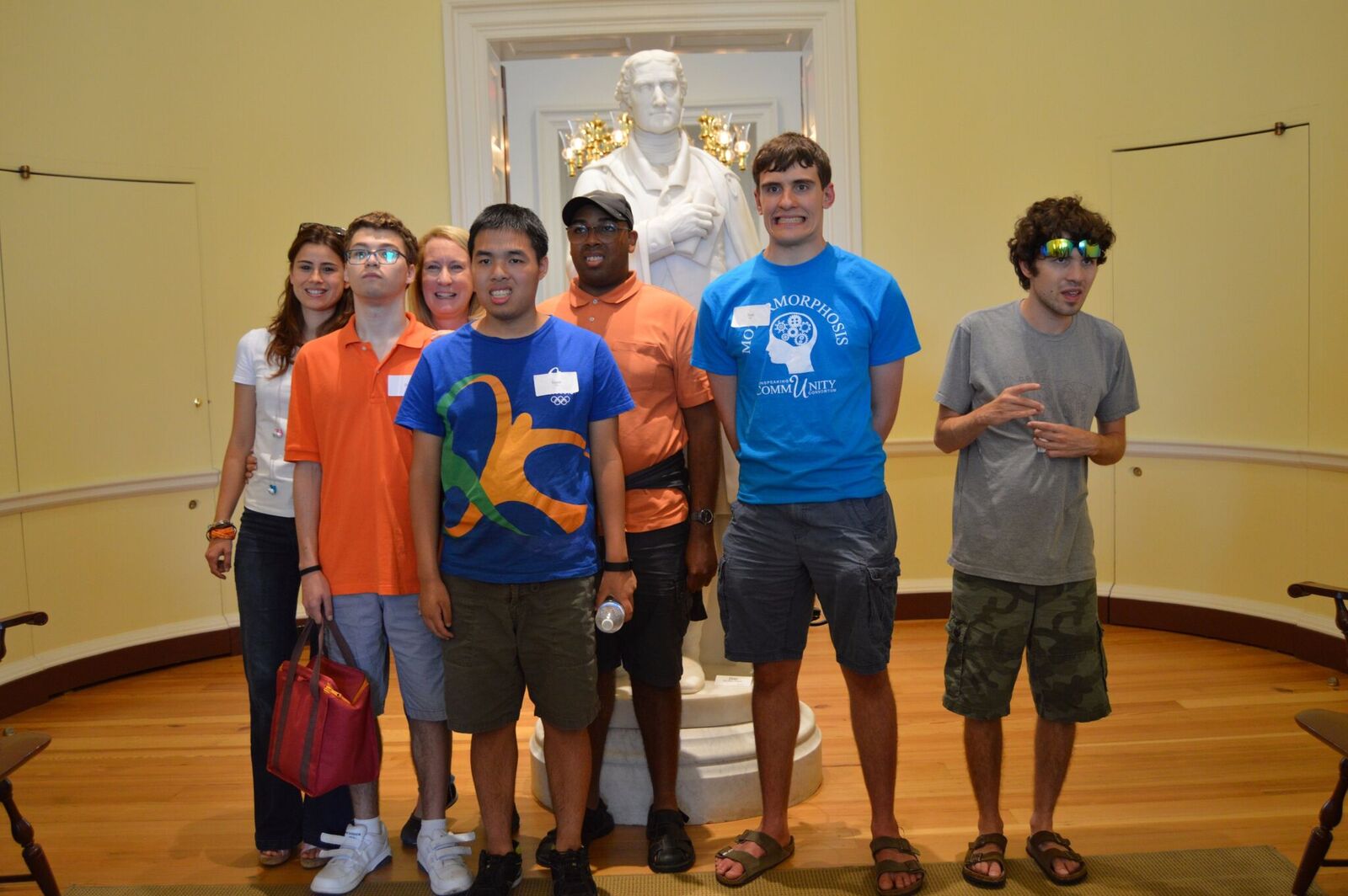 We had a wonderful, inclusive experience! Until next time, Roxy and the Tribe!