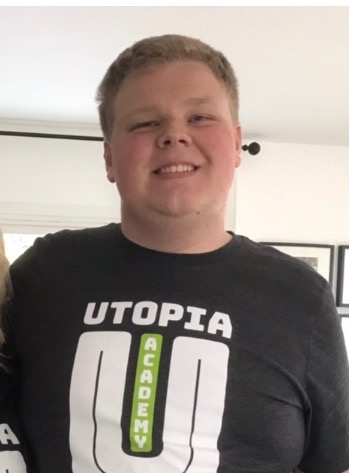 A Myth of Giant Proportions

When I first started working at Growing Kids, I worked with students who were brand new to Spelling to Communicate, as well as some who started with Elizabeth beforehand. Over that time, skills began to build, goals were being met, and fluency was increasing. For the students and for myself, as well! Doing a regular, ol’ lesson was getting too easy. We ALL needed a new challenge!

Mythology has always been one of my favorite topics, and I found that it also was a great way to get students to be creative in their own writing. There is always an interesting explanation of natural phenomena, like the changing of the seasons or how fire was created for man. Most importantly though, there is a moral to every story, a lesson to be learned. I was not quite prepared for the lessons my students taught me with their very own “mythology”. You’ll see what I mean.

With every lesson we do, there is always a “creative writing” question at the end. It’s a chance for the speller to express his/her thoughts on the topic. It’s a chance to be creative. This is always my favorite part of the lesson – personalities really start to shine! One of those personalities, is that of my dear friend, Alex.

Alex is 17 years old and types on a held keyboard. He had been typing pretty smoothly on the keyboard for a while, and I decided it was a good time to practice typing longer chunks at a time. But I wanted to keep it fun! We were doing a lesson on spirit bears (the white bears that live in Canada) and in it, I included the mythology of the spirit bear. This led to the following creative writing prompt:  Write a myth/story about Spirit Alex!

The story you are about to read, written by Alex, took several weeks to finish. We started out every session with a lesson to warm-up his arm, and we ended every session with his myth. The result is a beautiful, funny, heartwarming story that teaches a very valuable lesson. Check it out below, and feel all the feels!
Thanks for reading,
-Meghann

The Myth of Spirit Alex:

There once was a time when the earth was ruled by blond haired, gentle giants. However, these giants were not very smart. They often found themselves outsmarted at every village trivia night. They were always very good about losing, very kind and congratulatory to the winners. But inside all they wanted was to win. They decided to consult with their ancestors about what to do. The ancestors told the giants they would help. They told the giants to make bread dough, and to sprinkle it with lemon zest. The giants were to then sing to the dough ball.After their delightful serenading, the giants were to place the dough on the front step and go right to bed.

The next day, the giant named dad woke to crying and went to see what was up.
Lo and behold the crying was coming from the big baby now laying where the dough ball was. Dad yelped with glee and shouted for his wife, named mom, to come right away and see what the ancestors had done. Once mom saw what all the commotion was about she knew this baby was a gift from the ancestors. So, she called him Alexander.
Pinned under Alex was a note and it said:

This baby will teach you many things. First you should know that this baby is unlike any other baby. He does not communicate  like other people and he will say things he does not mean to say. It is up to you mom and dad to make this baby feel loved unconditionally and in return he will teach you both things you never thought were possible. P.s. He is super smart and will definitely help you win village trivia night.
Mom and dad were floored but they were up to the challenge. They scooped Alex up and brought him indoors.

Over the next few years Alex proved to be quite a handful.Dishes were broken, hair was pulled, tantrums were thrown and big messes followed Alex like a shadow. But no matter how infuriated mom and dad were at times, they cherished Alex and continued to let him be his own person.

One day, when Alex was big but not fully grown, he met a wise woman and her sidekick, sensei Elizabeth and master Meghann. They were the diamonds in the rough that was Alex’s and mom and dads life. First sensei E showed the trio the Alex that was trapped inside his giant and rude body. Then master Meg continued to push Alex to be stronger. Before you know it, mom could communicate with her boy at last, and he even made a few good pals.
But no matter how big the progress was Alex still was not ready for trivia night. He was swearing like a sailor, drawing on walls and pulling hair. The people of the village could not understand Alex and therefore did not like him very much.

The people who adored him, however, never gave up on their doughy boy. Cue eye of the tiger, because they all went rocky style on those disbelievers butts. Days turned into weeks, weeks turned into months. Mom knew she needed to take matters into her own hands.
And that is exactly what she did. Gone were the days of trying to fit a square peg in a round hole. Alex was being hurt more than he was being helped by the people in the village who were trying to mold him into one of them, one of the normies. Mom was reminded of the letter left by the ancestors. This baby is unlike any other baby. Of course he was not going to be or learn like other kids, Alex was not like other kids. This was a huge turning point for the whole family.

Alex was inspired now more than ever. No stopping him now. Days and nights passed as Alex and mom worked tirelessly on his social skills. So when the day finally came, Alex was ready to compete in the event. He was on a team with mom, dad, sensei E and master Meghann. They were not at all nervous looking at their competition. Then the bell rang, it was time to start. The first ten questions were too easy for Alex. The next ten were a little less easy but not too hard for Alex. The last round, however, had Alex and the team sweating. He did not know if he knew the answer to the last question. What did Egyptian medics believe was the cure for flatulence? Wait a second, Meghann talked about this. Just then Alex spelled the answer. Leeches. The bell rang, the winner was announced. It was team giant. The crowd cheered and chanted his name. Alex did it.  The end.