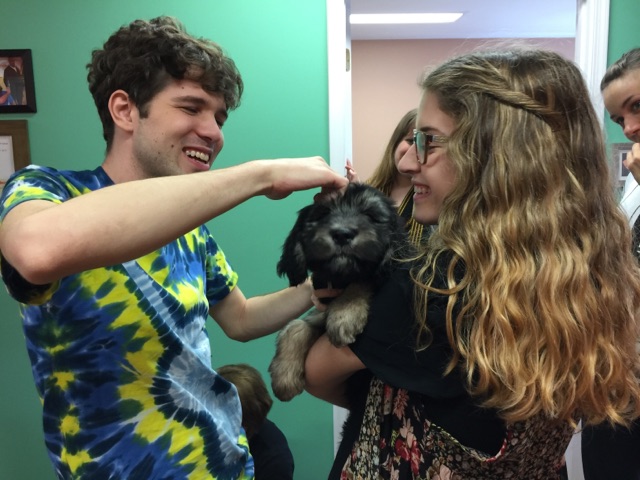 As many of you know, we are training Buddy, a goldendoodle, to become an OT dog.  Animal assisted therapy has always been a dream of mine. Adding a dog to a therapy session can be a great way to add some fun, motivation, and regulation. 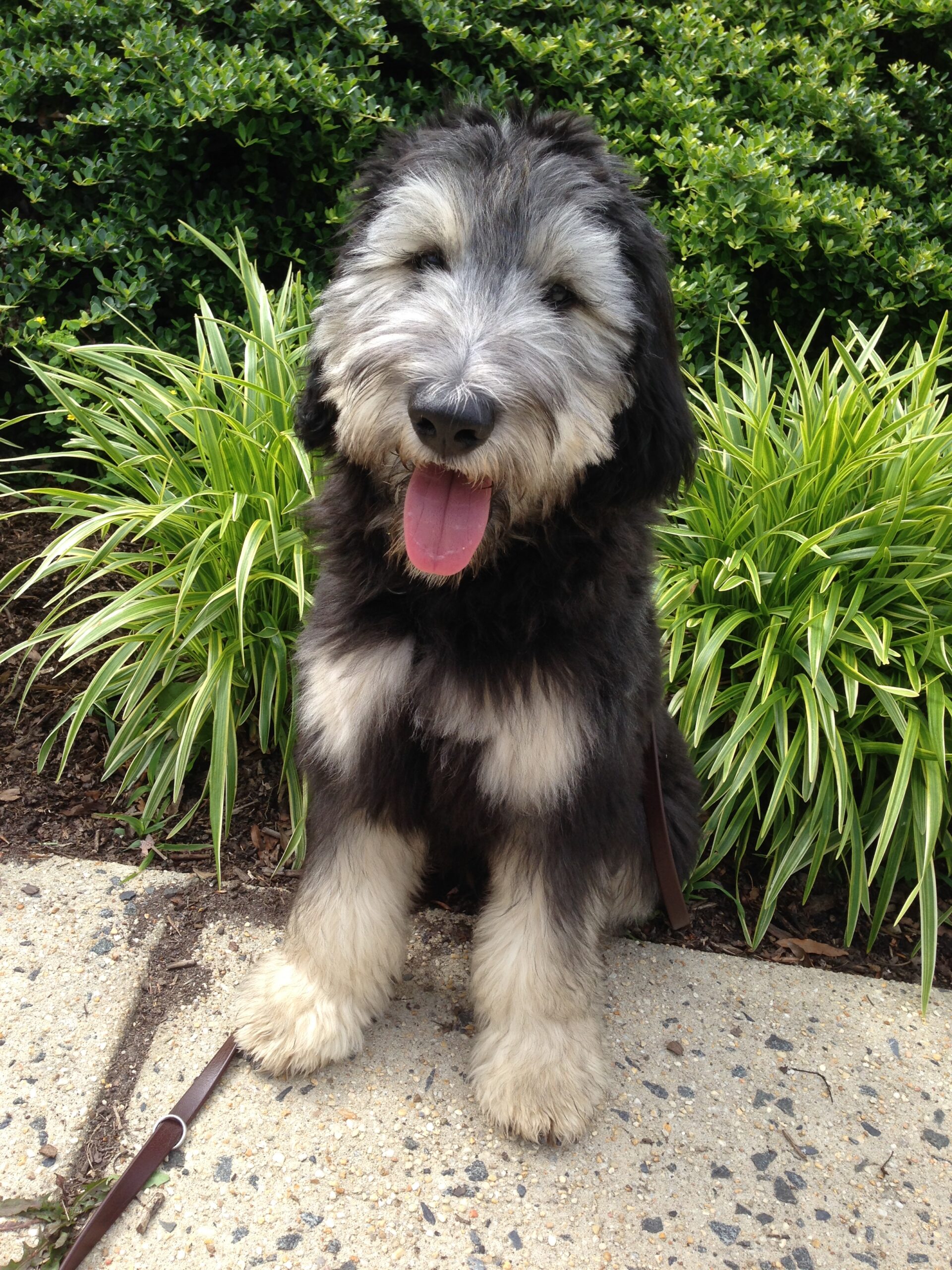 Ryan, a GKTC client, is a part of Team Buddy and has been an integral part of his training. Ryan has been working with Buddy and Donna, my mom and dog-trainer extraordinaire, for about 7 months. In that time he and Buddy have formed a deep connection. Ryan writes, “I HAVE WITNESSED MY FRIEND BUDDY TRANSFORM FROM EXCITABLE PUPPY TO A SMART, QUICK THINKING THERAPY DOG.” 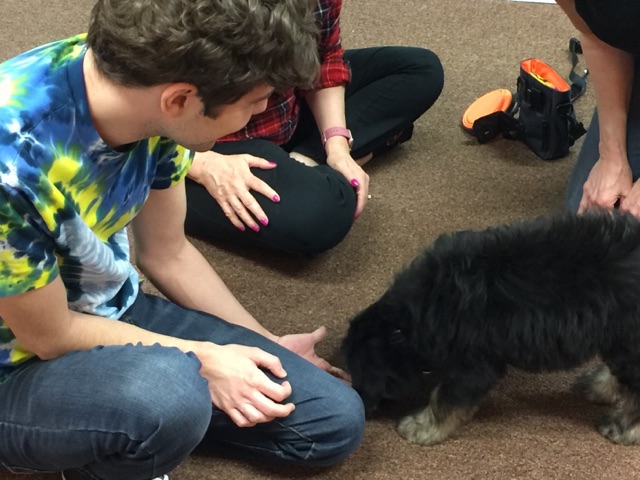 Ryan and Buddy have perfected many exercises and fun games that utilize purposeful motor. While Ryan practices the skilled motor control required for training, Buddy works on his obedience, patience, and self control. Buddy loves playing with Ryan and he is learning a lot of “tricks” that we incorporate into the games. Some of these tricks involve pushing things with his nose, jumping over things, crawling under things, searching to find things, or doing behaviors on queue. We have built many of these games, skill by skill, to the point where the game sequences Ryan and Buddy do are very complex. 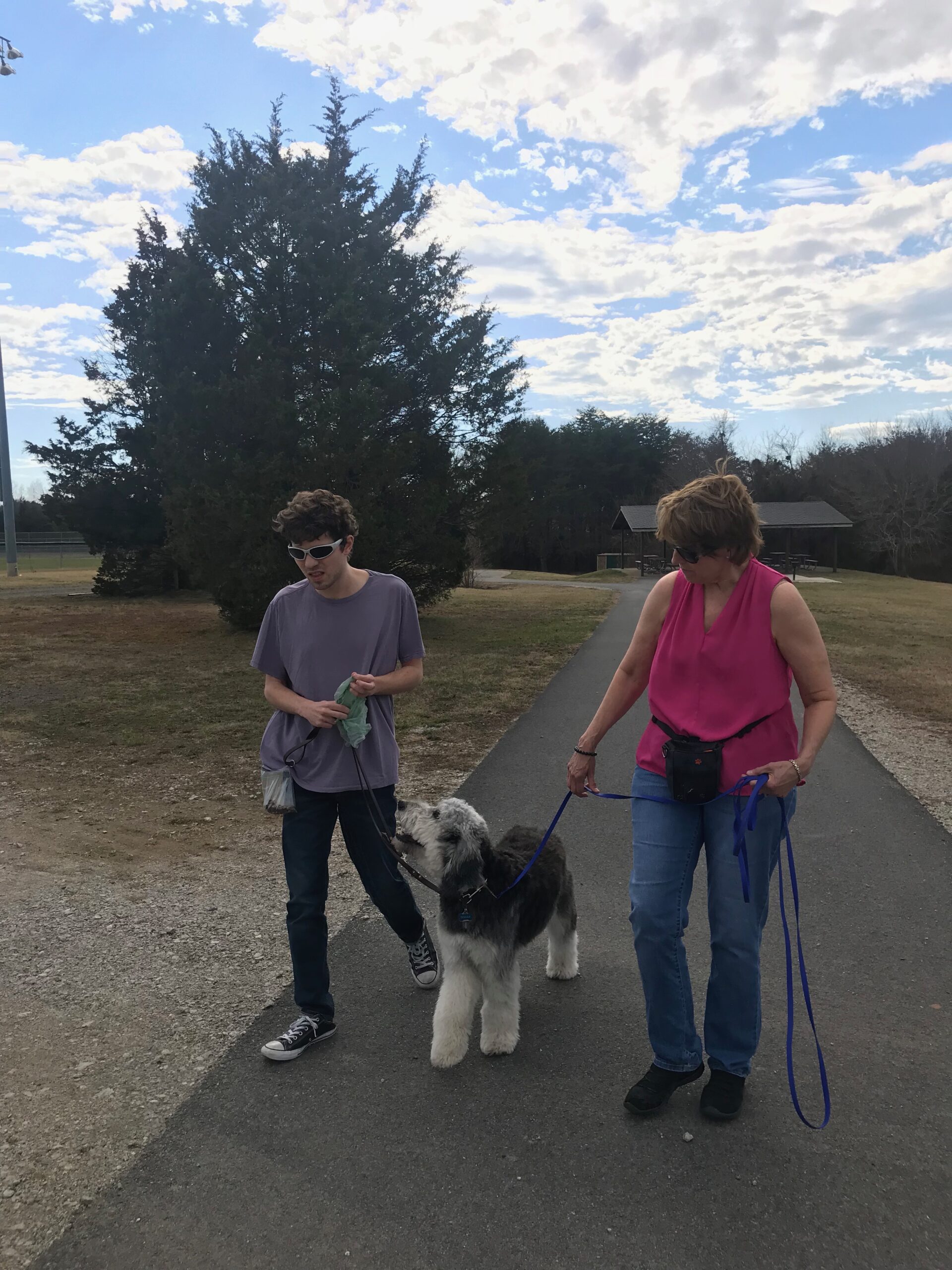 My mom, Donna, wrote this about a recent session:

Our last session was amazing. We had so much fun! I wanted to share what Ryan and Buddy were able to do.

Ryan came with his mom, Loretta. When Ryan first comes, we usually practice people greetings where Buddy, the energetic, people loving, teen-puppy is challenged to control his body enough to maintain a sit while he gets pet. Ryan helps by either approaching Buddy or standing still while Buddy approaches him. Ryan waits to pet Buddy until he is sitting nicely. Ryan pets him briefly then I have Buddy move on. Buddy works on controlling his body in spite of being thrilled at seeing his friend Ryan. Ryan must control his body so he can move toward Buddy or stand still. He must then time his pets to coincide with Buddy maintaining his sit.

As you well know, Buddy is a very smart dog. He loves games and I find he is sometimes a few steps ahead of us in the game play. I find I usually don’t have to give him commands when we play games. Once he figures out what we are playing he just does his part. 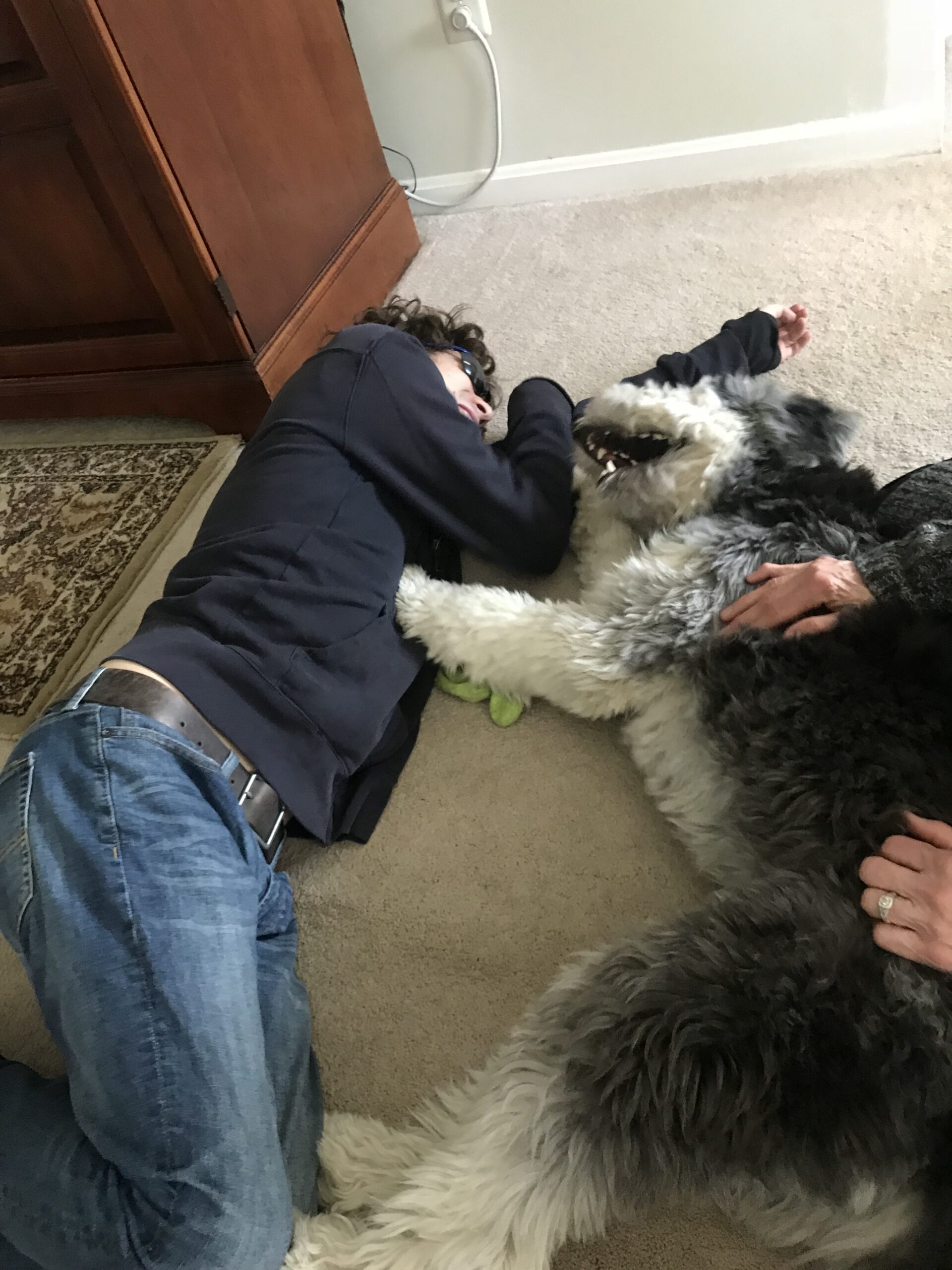 Yesterday, after the greeting exercise, we came inside. Ryan went to his usual seat on the couch. I asked Buddy to go to his platform bed. This gives Buddy a chance to practice self control because he would really prefer to go and get more pets from Ryan. Buddy waited on the bed for a few beats and then started searching to room like a trained search dog! He started searching high and low, sniffing, looking…I watched and realized it was just like a game we trained him to do!

I had to laugh! We play a game where I take Buddy out of the room. Ryan puts a few treats in a box (fine motor skill). Ryan then hides the box somewhere in the room then returns to his seat (purposeful gross motor). I bring Buddy in and have him go to his platform bed (obedience, patience). I release Buddy to look for the box (nose work, visual work, patience, persistence). We are always entertained watching Buddy searching for the hidden box. In this session, Buddy had picked up a couple queues associated with this game and being a smart guy, independently went to work!

After laughing at Buddy, we tried out a new game. I have been working on a game where I throw a ball and have Buddy retrieve it. Buddy returns and drops the ball into a box, then lays down. He waits until I take the ball out of the box and I throw it again. This was the first time we tried it with Ryan. For Ryan it involves reaching into the box for the ball then throwing it. When Buddy returns, Ryan needs to point to the box which is Buddy’s queue to drop it. We give a rousing round of applause at Buddy’s success with this task. This is quite a complicated sequence for Ryan and Buddy that involves gross motor and timing for Ryan. It involves patience, obedience, and skill for Buddy. This is the first complex game we have played that did not involve treat rewards for Buddy. His reward was simply the fun of playing with Ryan. Both Ryan and Buddy were stars at this new game. 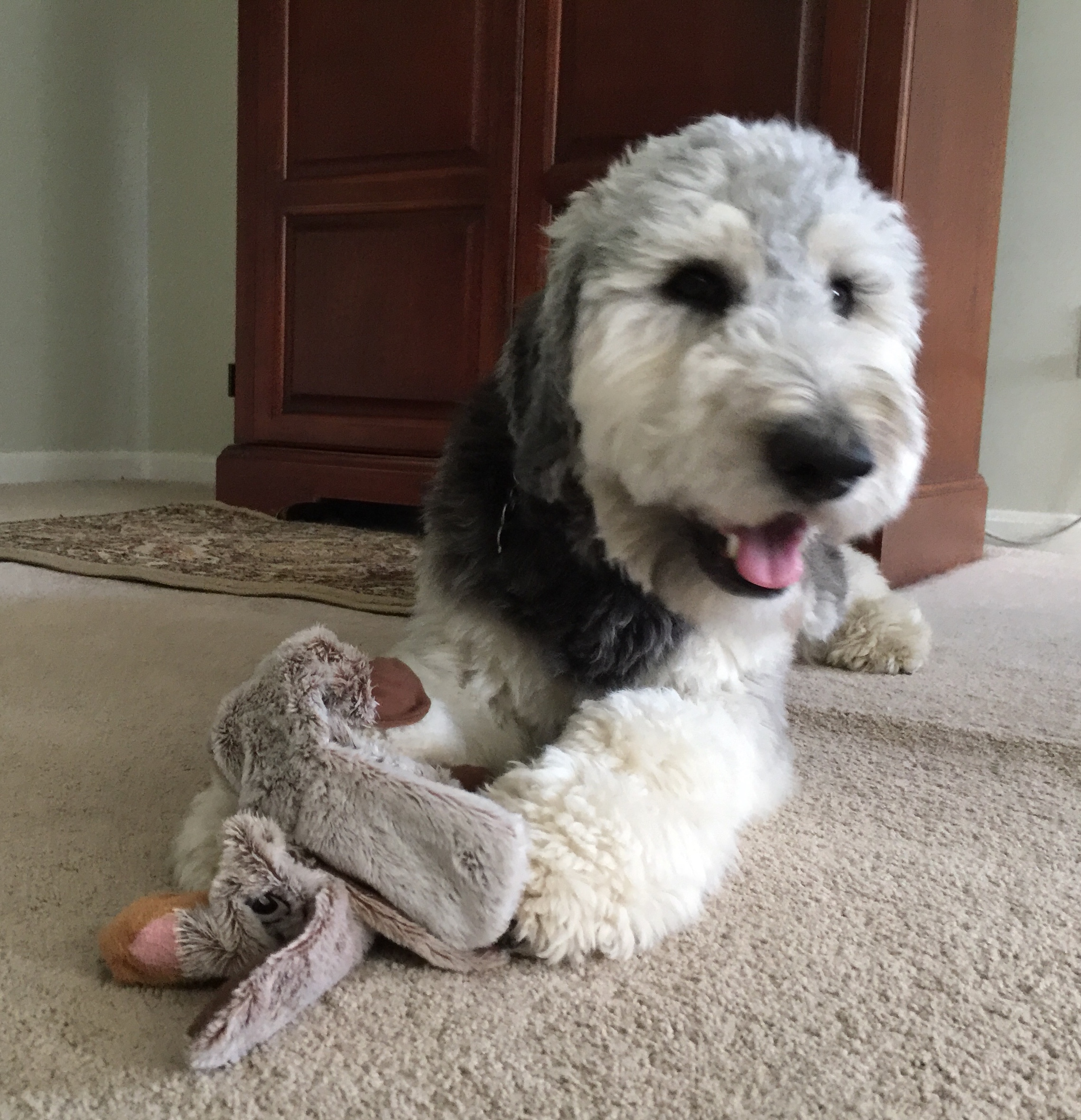 The next game involves timing and focus. By practicing the individual pieces, we have built up the number of steps in this game. Yesterday, Ryan, Loretta, and I each had a treat bag. We walked randomly around the room. Buddy’s job was to approach someone and sit. Once he sits nicely, the person rewards him with a treat and then resumes walking. Ryan’s part is complex because it involves starting, stopping, timing, and fine motor. He must control his body, but pay attention to Buddy and respond when Buddy does his part. He also needs to make sure Buddy sits before giving him a treat. I’ve seen where this can be especially hard. I’m pretty sure Ryan and Buddy have worked out a system where Buddy uses his charm and Ryan, being a good natured coconspirator, gives him a treat sometimes when he’s not sitting!

Playing this game yesterday, Ryan was grinning from ear to ear. Buddy completely ignored me – I didn’t have the best treats and he knew I would make him do the sequence perfectly. He would pause near Loretta, but seemed to think better of it. He chose to focus most of his attention on his friend, Ryan. Buddy loves doing tricks for Ryan and Ryan loves making Buddy happy with treats! It was hard to tell who was smiling bigger, Ryan or Buddy! 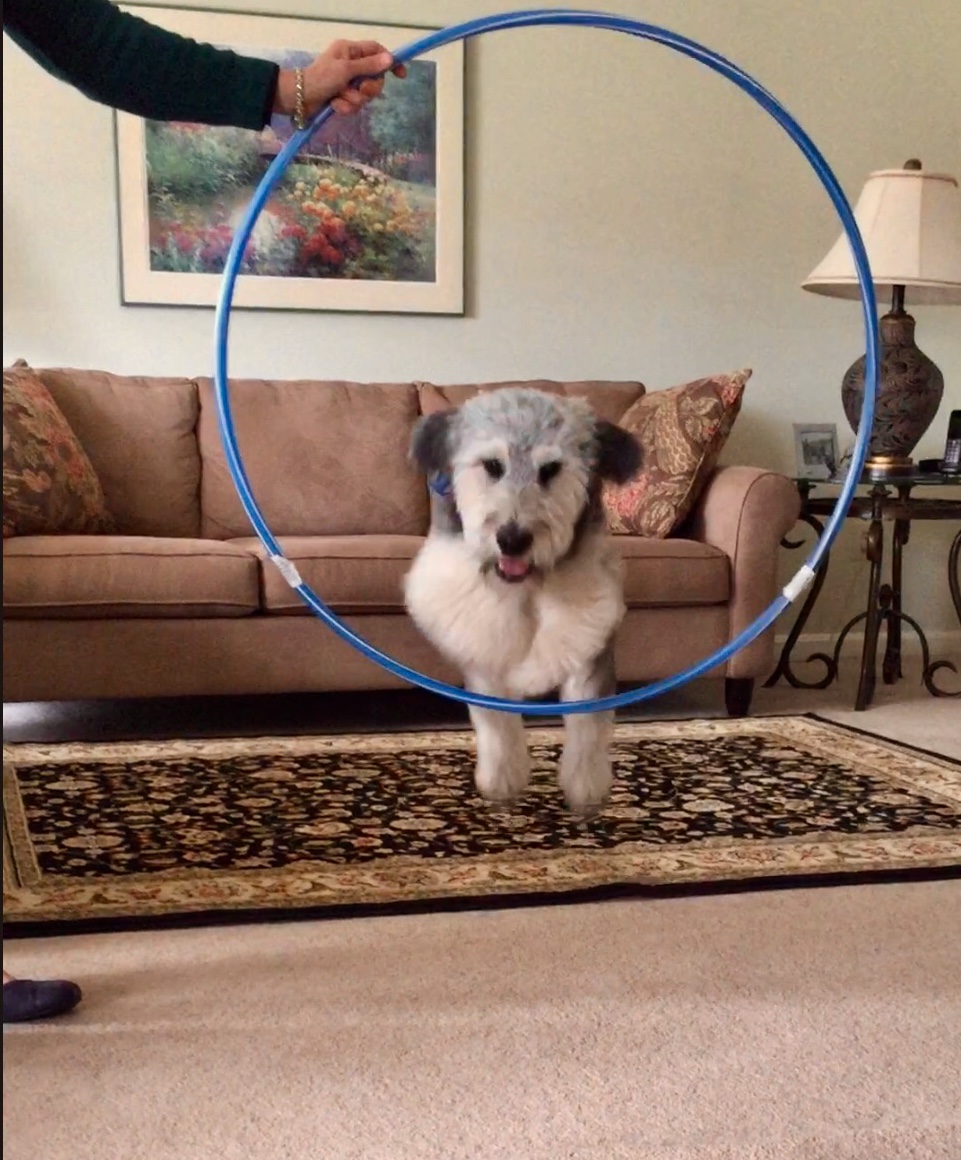 We also played a game using a hula hoop and clickers. Buddy comes when you click a clicker. Loretta held a hula hoop with Ryan on one side and me on the other side. Ryan and I, armed with clickers and treats, were supposed to click and reward Buddy for jumping back and forth through the hoop. This game involves timing of both the clicker and delivering the treat. After the first two clicks from Ryan and me, Buddy was happily bounding through the hoop on his own with abandon to get treats. Buddy was having SO MUCH FUN! Ryan was laughing so hard at him! Loretta and I joined in, laughing at both Ryan and Buddy.

There was so much laughing! This is therapy at its best!

Ryan has written, “THERE, IN THE MOMENTS I HAD WITH BUDDY, I LEARNED WHY THEY SAY DOGS ARE MAN’S BEST FRIENDS. BUDDY DOESN’T MAKE ME FEEL DIFFERENT, HE DOESN’T HAVE ANY EXPECTATIONS, HE DOESN’T JUDGE ME. BUDDY JUST LIKES BEING THERE WITH ME. AND TREATS. HE LIKES TREATS. HE LIKES THOSE A LOT.”

“I WISH EVERY AUTISTIC HAD A BUDDY LIKE BUDDY. THE DAYS I SPEND LEARNING AND PLAYING WITH BUDDY ARE SOME I WILL ALWAYS BE ETERNALLY GRATEFUL FOR. I AM THANKFUL AND FORTUNATE THAT I HAVE THESE OPPORTUNITIES TO GROW.”

We are thankful and fortunate to have Ryan who has become quite the Dog Whisperer!